This page is designed to keep our Parents up to date on Club News, Coaching Philosophies, and Parent Education.  You will find articles, posts, and flyers relating to the driving philosophies and expectations at Sporting Arkansas.

All new players will need to give copies of their birth certificates, medical release form, copy of medical/health insurance cards, the signed parent/player contract form. (please see links below) to their team managers or coaches before their first practice. All returning players will need a new medical release (with copy of insurance cards) form and parent/player contract submitted to their team manager.

We are pleased to welcome Coach Otávio Norberto!

Coach Otávio will be taking the Academy Director position starting with the 2020/2021 season. Coach Otávio previously coached Sporting Arkansas 2008B and 2005B, who he took to the National Cup in 2019.

Coach Otávio grew up in a suburb of Sao Paul, Brazil, with his 2 siblings. He fell in love with soccer watching his father (former professional futsal player) and his grandpa play.

He started playing in the streets of Brazil until he was selected to join his first professional club. At the age of 14, he was selected to represent Brazil in a South American tournament in Chile, where he had the opportunity to be teammates with some of the best youth soccer player of Brazil, including David Luiz and Denilso Pereira Neves. After this opportunity, he moved to one of the best youth clubs of the country at that time, "Associação Portugesa de Desportos."

After his playing career, Coach Otávio graduated with a degree in physical education and earned his master's degree in sports training. He started his coaching career as a strength and conditioning coach in the very prestigious youth academy of  São Paulo Futebol Clube, a club known worldwide for producing world class stars such a Cafu, Kaka, Rogério, Ceni, and many others.

Otávio is married to Fenando Donati and they have two children, Daniel (3) and Luiza (3 months).

This new opportunity will be available to the following girls age groups for the upcoming 2019/2020 seasons: 04G, 03G, 01/02G.  A team of dedicated and experienced coaches from both clubs will provide top level training for teams. sAc Elite teams will participate in the highly competitive Red River Division of the National Premier League and will attend college showcase events/tournaments. This partnership will continue to push and elevate the quality of girls’ soccer in our area and provide unparalleled opportunities for players who want to develop into collegiate level athletes.

Interested players must register for tryouts using this link:https://www.gotsport.com/asp/application/reg/?ProgramID=80466&Type=PLAYER

Thank you Cortney to all you do for your team and club! Cortney is the coach of 07 Girls Blue. She very dedicated to the development of her players and the success of her team. Coaches like Cortney are what helps make Sporting Arkansas the best of the best!

There are always a few questions around VAP and how those funds can be allocated.  Please see the attached document for a better understanding on the policies surrounding VAP monies and volunteer hours.  Please email operations@sportingarkansas.com with any questions.

New Legislation: Please click on the document below to read

HOW TO NAVIGATE SPORTSENGINE

SportsEngine is our main method of club and team communication.  This app can be downloaded and will populate to email, calendars, etc.  Here are a few trouble shooting links that you may find useful:

searching for teams and adding to favorites

App download and selecting/finding your team instructions are included in the PDF below.

Have you ever wondered what the benefits of being an SKC Affiliate Team are?  Find some of those answers here: 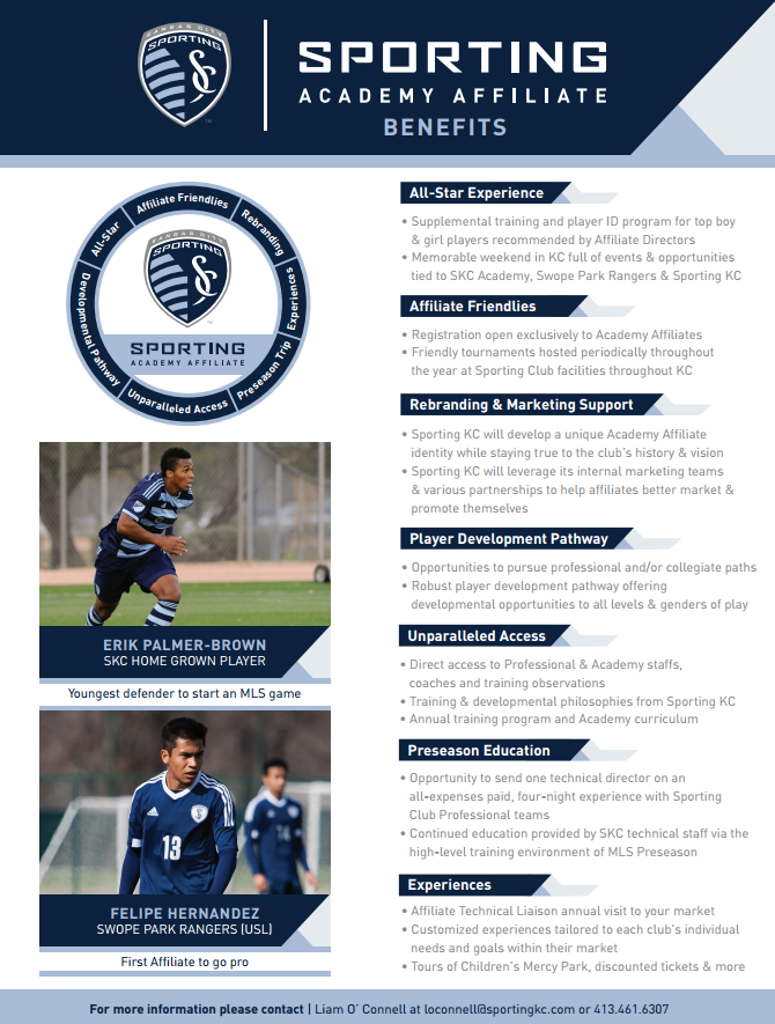 FANS CANNOT PURCHASE TICKETS AT A DISCOUNT THROUGH THE SEATGEEK APP.

Naman will be able to help with any ticket needs you have throughout the season. You can get ahold of him via email at nwajid@sportingkc.com.